A couple of days ago, I have visited the Leeds Art Gallery to see the ARTIST ROOMS’ exhibition dedicated to Joseph Beuys (1921-1986). The ARTIST ROOMS is a traveling collection of international modern and contemporary art that is owned by the National Galleries of Scotland and Tate, who curate monographic exhibitions across the United Kingdom. And at the moment, a great number of seminal works by Joseph Beuys are on display in the Leeds Art Gallery (13 Oct. 2017 – 21 Jan. 2018).

Fascinated by the social dimensions of myths, Joseph Beuys created his own mythical legend. When serving in the air force during World War II, his aircraft crashed on the Crimean front. Later he would recount this incident by creating the myth that he was rescued by nomadic tribesmen, who wrapped him in animal fat and felt and saved him from freezing to death. In fact, his entire oeuvre is based on concepts of social philosophy and the idea that art can provide healing powers for society, especially in post-war Germany.  Therefore, an integral element in his extended definition of art was the participatory role of artworks and live performances in shaping society and politics. Open public debates on a wide range of subjects, such as, political, environmental, social and long term cultural phenomena, are characteristic of his artistic work.

A piece of work that I found particularly intriguing in the exhibition, is the ‘Scala Napoletana’ (1985). 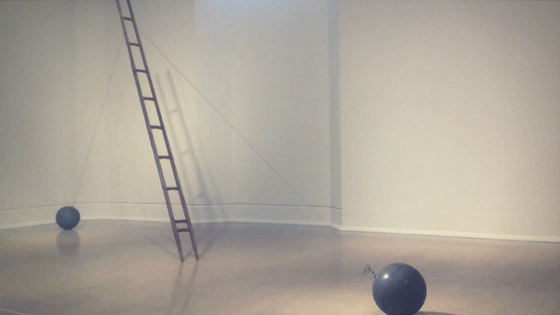 With this work, Beuys reminds us that art is there to bring society back into harmony. The wooden ladder is held up in suspension by steal wires that are attached to two round weights on the ground. Although the delicate equilibrium appears very fragile – I have to admit that I took a second look to see whether or not the ladder was additionally fixed to the ceiling – the work also transmits an uplifting energy and a sense of assurance that finding a balance is possible. With this, Beuys wanted to stimulate a general idea of the power of social balance. More specifically, he dedicated this work to the city of Naples that suffered a devastating earthquake in 1980. In an article for the newspaper Il Mattino, Beuys wrote:

“Balance has to be searched for, although in reality it does not exists. Not even in today’s society can you find economic balance, whereas ecological balance still exists in nature. It is important to take the latter form as a model.”

Not only with regard to today’s sociopolitical developments on an international level, but also in light of climate change and ecological catastrophes, I think that Beuys’ work is more relevant than ever.

Although the exhibition does not provide an elaborate curatorial programme, to guide the visitors through the rooms with accompanying biographical information and explanations of the works, the exhibition is worth visiting as it captures the artists’ key ideas about and approaches to art.